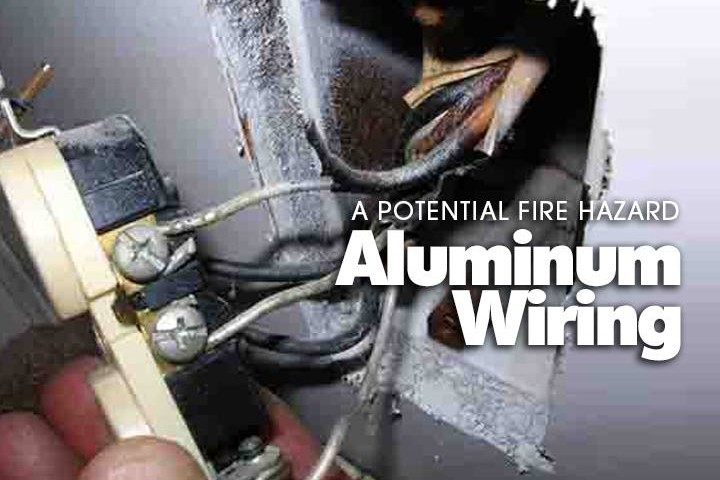 Aluminum wire manufactured after 1972 was somewhat improved, though the introduction of aluminum alloys did not solve most of the connection failure problems, and aluminum use for branch wiring, that is wiring to receptacles and switches, ended by the mid seventies.

Now forbidden by building codes for internal branch wiring, aluminum wiring is still used for such applications as residential service entrance wiring, or single-purpose higher amperage circuits, including 240-volt air conditioning and electric range circuits. For these applications, a heavy-gauge aluminum wire can be used, eliminating the hazard created by the smaller-gauge branch wiring.

Aluminum wiring use started in 1965 as a cheap alternative to copper wiring. Its cheapness, observed one builder, was evidenced by the fact that no one came to a home building site to pick up aluminum wire scraps as they had always done with copper wire. Within a few years, however, the less expensive wire proved itself to be a weak substitute for copper.

One common problem with aluminum wire is that it more easily corrodes at connections than copper. Such corrosion increases resistance and this increased resistance causes overheating of the wire at connections with switches or outlets, or at splices.

Another problem arises because aluminum wiring expands more than copper during the expansion and contraction that carrying electricity causes wire to go through. The constant expansion and contraction can eventually loosen the screws holding the wire onto the light switch or receptacle, or loosen at a spice, causing the electricity to arc in the wall at the loose connection. Such an arc is like a flint rock being struck and making a spark inside the wall, eventually finding surrounding building material that will serve as tinder.

If you are not sure whether a home has aluminum branch wiring, you might be able to tell by looking at the markings on the surface of cables left exposed in unfinished basements, crawl spaces, garages or attic. Aluminum wiring will have “Al” or “Aluminum” marked every few feet along the length of the cable. Copper-coated aluminum wire does not present the fire hazard of plain aluminum wire. It is marked CU-clad or Copper-clad.

Although not all failing aluminum wire connections give any tell-tale signs of their eminent demise, there are sometimes warning signs. These include warm-to-the-touch face plates on outlets or switches, flickering lights, non-functioning circuits and the smell of burning plastic at outlets or switches.

The “feel the faces” advice, though often given, is ineffective and potentially dangerously misleading since the person doing the feeling often has no idea how much current, if any, a receptacle’s connections have been carrying, and for how long, prior to being “tested” in this way.

A better method is to turn off the power to the outlet at the main power breaker, remove the cover plate, and then, using a bright flashlight, inspect the area of each wire terminal. Look for charring or discoloration of the plastic wiring device body around the screw terminals, abnormal tarnishing or corrosion of wire and screw terminal, melting, bubbling or discoloration of the wire insulation.

Also keep in mind that such inspection can reveal only what has happened, not what might happen. An aluminum wire connection might not have overheated in the past because no significant current was ever flowing in its part of the circuit. It can look “like new” but overheat to hazardous levels when a new load, such as a television, portable heater or cooking appliance is plugged in.

If you have determined that the branch wiring in a home is aluminum, it should probably be replaced with copper wiring throughout the home and the disconnected aluminum wire left in the walls. If this is financially unrealistic, a form of patching can be done at receptacles, switches and splices. This, however, is exacting work and should be carried out only by a certified electrician. There is always risk of property damage, injury and death associated with working on the electrical system of a home. It is not a job for do-it-yourselfers. Disturbing such connections without fully knowing what you are doing can often make them more dangerous.

A practical approximation to rewiring can be achieved by a method known as “pigtailing.” This entails using a specially-selected connector and installation method to splice a short length of solid copper wire to each aluminum wire end. The copper wire “pigtail” is then connected to the switch, receptacle, circuit breaker, light fixture, etc.

In the meantime, a fire hazard can be lessened by removing from around aluminum-wired receptacles and switch boxes anything that might ignite, such as bits of wallpaper, wood dust/saw dust, insulation. Also keep stacks of storage boxes or furniture away from such receptacles.

Both ASHI (American Society of Home Inspectors) and UL (Underwriters Laboratories) have extensive information about aluminum wiring on their websites.