Helpful ArticlesArticlesWhy is Everyone Afraid of EIFS?

Why is Everyone Afraid of EIFS?

If you visit the EIFS Industry Manufacturers Association's (EIMA) web site, you would learn that "few, if any, competitive (siding) materials offer such a wide range of desirable product benefits (as EIFS). Chief among these are superior energy efficiency and virtually unlimited design flexibility." It's a material that has been recognized and approved for use by the International Building Code (IBC) and International Residential Code (IRC) since 2009.

There are many people still asking the question, "What is EIFS?" EIFS is an acronym for Exterior Insulation and Finish System. According to the definitions contained in the International Building Code and ASTM International, an Exterior Insulation and Finish System (EIFS) is a non-load bearing, exterior wall cladding , barrier system that consists of an insulation board attached either adhesively or mechanically, or both, to the substrate; an integrally fiber reinforced base coat; and a textured protective finish coat. 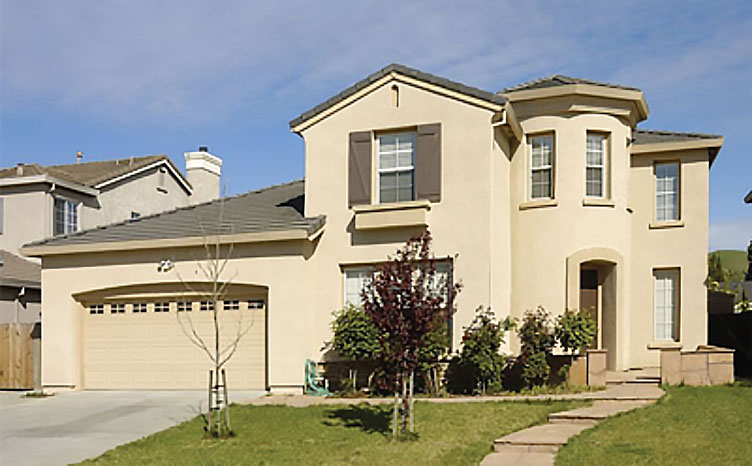 You might ask, "How long has EIFS been around?" It goes back to around 1952, when the first patent was granted for expanded polystyrene insulation board. In this same year, the first synthetic plaster was developed. In the late 1950s, EPS and synthetic resin materials were first used together. In 1963, EIFS were first marketed in Europe, and in 1969, EIFS were first introduced in the United States. They were first used on commercial buildings, and later, on homes.

EIFS use in the United State's residential construction market gained prominence in the late 80's to late 90's. Prior to this rapid rise, EIFS was mostly used in commercial building construction. Most commercial buildings are steel and masonry structures. EIFS was actually first used in Europe to provide a cost effective means of renovating and insulating masonry buildings.

Since houses have historically been of wood frame construction, the application of EIFS on houses in the late 80s-2000's was the first attempt to use the product on wood. Unfortunately, the installers were using EIFS-installation techniques commonly used in the commercial building industry. This revealed a serious Achilles Heel when it came to the proper application of a barrier type cladding system on the exterior building envelope. Substandard flashing and wall penetration details and direct ground contact quickly led to wood decay and insect infestations in thousands of home's exterior walls as water seeped into the walls at the penetrations/flashing and became trapped due to the water-tight nature of EIFS's surface coatings. During the extended crisis, EIMA was integral in getting proper installation details out into the public's and residential construction industry's workforce. Hence, since the mid 2000's, the majority of EIFS installation contractors have learned how to install the product and maintain proper water management in the exterior building envelope. The EIFS product today is actually modified from the original materials used, and the installation techniques being used ensure proper water management and long-term successful performance. And the majority of older homes have already been retrofitted with proper installation and flashing details, making them able to last the long haul. Don't get me wrong. I'm sure there are plenty of homes, which haven't been retrofitted. But this is not always as expensive as you might think.

Hence, everyone needs to relax, take a deep breath, and not fear this wonderful "but crippled-reputation" product. It is truly an attractive, exterior cladding, which enhances a home's overall appearance, insulative performance and sound reduction.

We at JADE Engineering and Home Inspection have been performing EIFS inspections since the mid-90s, and we were consultants in several of the class action lawsuits that haunted the industry once the moisture penetration problems were discovered. We understand what these problems are, how to determine if they are present, and what needs to be done to correct any problems that might exist. We can develop plans and specifications for repair of any structure that might need it, and we can inspect the repairs to make sure they conform to published EIMA details and specifications. This will ensure that the EIFS on the home has all the critical attributes that make it, realistically, one of the best exterior siding materials/systems available.