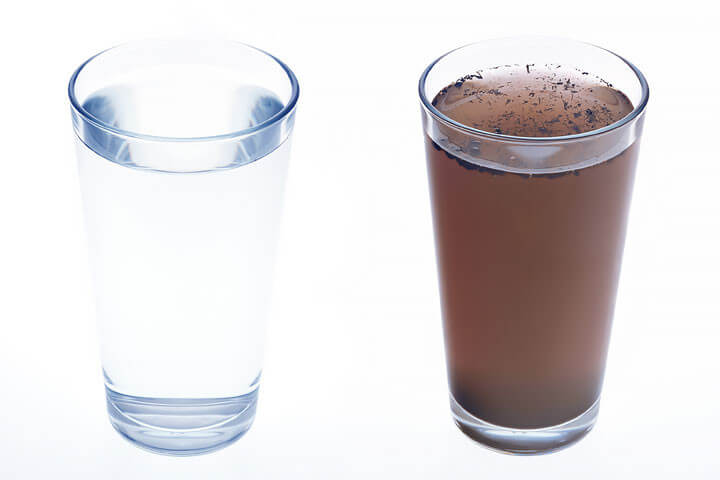 Does the potential exist for contaminated water to mix with your drinking water? The answer is–probably “yes”, especially if you have an older home. When backflow occurs, contaminated water issues can result.  Houses built during the first part of the 20th century are the most likely to have such a potential problem, but amateur plumbing practices and other plumbing nightmares still create the potential for public water contamination in many of the homes we inspect.

What are commonly called “cross-connections” occur whenever a potable water source comes into direct contact or “connection” with a holding basin that contains contaminated water, i.e. a kitchen sink or bathtub. Blatant cross-connections are thankfully prohibited by most Plumbing Codes. Where there is no other reasonable alternative, however, cross-connections to the potable plumbing system are allowed if an approved protective device is used. These are called “back-flow preventers”.

The process by which a contaminant enters the drinking water plumbing system is called back-flow. Back-siphonage or negative pressure can cause back-flow. Negative pressure can be caused when the pressure in a customer’s water system is increased above that of the city’s or county’s water supply system. This can happen, for instance, when a customer uses a pump to increase his water pressure and it malfunctions. “Even heating water, which expands the water and produces pressure, can create back pressure”, said David Kellogg, president of the Tennessee Chapter of the American Back-flow Prevention Association.

“By far the major condition that causes back-flow in the average home would be back-siphonage,” according to Kenny Hart, a home inspector in Virginia Beach, VA., writing in the April, 2000 issue of the American Society of Home Inspectors (ASHI) publication, The ASHI Reporter. Back-siphonage back-flow begins when the normal flow of liquid is reversed by the introduction of a vacuum or partial vacuum. Siphoning gasoline from a car’s gas tank is a good example of how back-siphonage back-flow works. Once the vacuum is introduced by someone sucking on the hose, the gasoline will flow out of the tank without continued sucking on the hose. A water main break, during which the water flows in a direction different from its usual course, or a fire engine pulling water from a fire hydrant can begin the back-siphonage back-flow process. Although this alone won’t contaminate the public water supply, it may if someone has an active cross-connection inside their home.

The most common cross-connection that we see during an inspection is when a faucet (spigot) is lower than the overflow drain in a sink, bathtub or laundry basin. Hence, if a negative pressure developed in the water main (during a fire or break) and the sink/tub/basin was full of contaminated water, and the spigot was open, the contaminated water could be sucked back into the potable water supply. This potential problem also exists with kitchen sink vegetable sprayers and hand-held shower heads such as shower massagers, if the tube is long enough for the sprayer head to drop into bath or sink water.

Decatur plumber Eric Hepler said he rarely sees dangerous cross-connections in homes anymore, except on some old-fashioned bathtubs and toilets, or some do-it-yourself plumbing creations. It’s not a problem with modern, code-legal fixtures, he said, which are designed to prevent back-flow.

Historically, the most common cause of widespread community water supply contamination has come from unprotected hose bibbs or sill cocks. It is not unusual for home owners and service personnel to attach a garden hose to a hose bibb, drop the hose into a large tank filled with chemicals or fertilizers then walk away. There have been several deaths and multiple illnesses attributed to this scenario-here in Alabama. Protection against such occurrences, as a 1981 mishap in which the contents of a tank filled with insecticide got pulled into a city water system, is available in the form of a ten-dollar “hose bibb vacuum breaker.” Kellogg said such incidents are a growing problem because of the spread of toxic substances in everyday use.

Another potential problem is a sprinkler system. Since these are directly attached to the potable water supply, some form of back-flow prevention device must be installed to prevent possible back-siphonage. Many sprinkler systems are installed by “do-it-yourselfers” and these are the ones unlikely to contain a back-flow device or check-valve.

As you can see, cross-connections are a serious health/safety concern and one that all home inspectors should be looking for. You might want to discuss this concern with the next home inspector you meet. Should the inspector be unaware of this problem or shrug it off as unimportant, I’d recommend seeking another home inspector next time around.