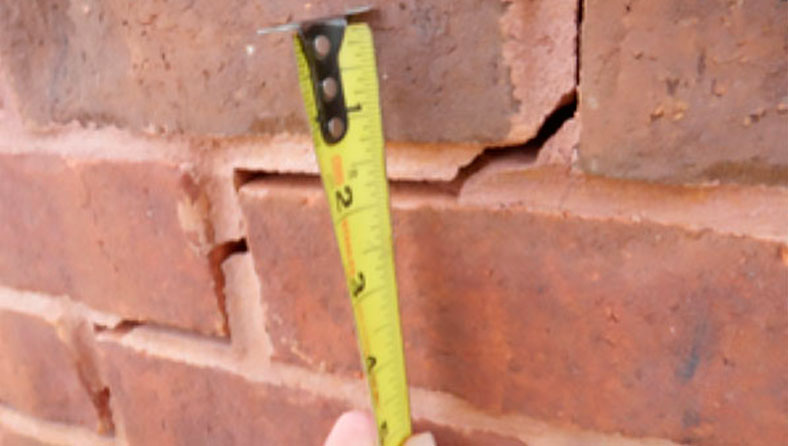 Chimney separation can result when the bearing soil around the home settles. Make sure you know the signs and how best to respond. Read on to learn more.

A fireplace adds warmth to any home. Whether lying before a quiet romantic blaze or huddling near a roaring conflagration, humans have made fireplaces part of home designs since it was first figured out that being warm was better than being cold.

That fact hasn’t changed over the years. Neither has fireplace making. It still involves stacking blocks or bricks in a way that will allow fuel to be burned efficiently, heat to be conducted into the room, and smoke to be ushered up the chimney. And this is important, too: that stack of bricks, usually weighing ten or more tons for even a modest chimney, has to stand up straight.

So you’re out eyeballing the old home place. You admire the straight lines of your home. Lack of sag is usually a good thing. But something is amiss. You take a closer look. It’s your chimney! It’s…leaning! Get a grip. Calm down and feel the firm earth under your feet. Wait a minute! Maybe that’s the problem. How firm is the earth under your feet?

Leaning chimneys are usually caused by settlement or bearing soil failure. It doesn’t take much. For example, if the outer edge of your chimney’s footing sinks just 1/4 of an inch, the resulting crack between the chimney and the roof can be as much as two to three inches! Tiny slip at bottom equals huge gap at top. Through that gap can come all sorts of trouble. And that trouble is usually in the form of water.

The sandy silty clay soils often found in Alabama normally provide a firm foundation and usually stay put. It’s when the footing is placed on soil that has been “disturbed” during construction, or, worse yet, soil that has been contaminated by building debris or other foreign matter, that the problems often begin.

Even such susceptible soil, though, usually needs a reason to move. And that reason is usually in the form of water.

While you’re trying to figure out why your chimney is out of plumb, take a look at how water drains around your little piece of paradise. Is water moved away from your house? Do your gutters keep it away from the foundation of your chimney? Highly plastic clay soils can shrink or swell due to changing moisture conditions. Winter rains usually mean swollen soil. Summer soil is comparatively dry, or desiccated.

Such movement, as natural as it is, is detrimental to masonry structures and provides an opportunity for the chimney to rock back and forth and separate from the home. Usually this is nothing to worry about if the chimney footing bears deep into the ground.

Exaggerate this motion by poor drainage, however, and you’ve got a problem. Make sure water drains away from your house. Make sure that runoff from the roof does not saturate the ground around your foundation.

And before you exclaim that your chimney’s lean is due to nothing so mundane as water drainage (Thank you!), consider that the more exotic reasons, such as wind and lightning, rarely ever turn out to be the true cause. That is unless you’ve just come through a horrific storm. Even then, it was probably the copious rain and not the abundant breeze that made your chimney totter.

If lightening had struck your pile of bricks, there would likely be an explosive type of damage rather than an outward lean.

Wind? Probably not. If wind caused your chimney to lean, it would have to have been some fantastic and memorable wind, as in “You remember the wind of ’95. Put the part on a different side of my hair. Blew my chimney crooked, too.”

Not likely. Note that chimneys usually have only small areas subjected to the wind. Most of the structure is protected by the house and roof. The force of wind is usually negligible compared with the weight of the chimney.

So the gap between your chimney and your house continues to let water ravage your roof, your floor, your walls. You know water. And on top of that, your chimney might go ahead and fall on over. What can you do?

Call a professional. The inspectors at JADE Engineering will be happy to visit your less-than-perpendicular pile of bricks and tell you if the problem is worth fixing. A JADE engineer will even arrange a soil test to reveal just what kind of dirt you’re dealing with. If the underlying soil is an expansive clay or pile of rubble — as in former dump — then an appropriate repair can be developed.

Keep in mind, though, that trying to straighten a leaning chimney is not a do-it-yourself proposition. Your JADE engineer will be able to recommend people who are experts at this complicated and exacting task.

Here’s one way a professional might go about straightening your chimney. Vertical shafts are drilled several feet deep along the edge of the chimney’s foundation. These are then filled with reinforced concrete. The pour is stopped about 12 inches beneath the footing bottom and the concrete allowed to cure. The solid concrete pier can then become a surface for jacking the original chimney footing back to level. Once the footing is level, or plumb, then the remaining space between the original footing and the pier cap can be filled with concrete.

Once your chimney is level, you can then repair the displaced roof flashing. Remember: seeping water is never idle.

If the inspection reveals that your chimney is too far gone, then you can dismantle it and rebuild. This time make sure the footing is made competent by being big enough to spread the massive weight of the chimney over a large enough area. And make sure you have dug deep enough to reach undisturbed soil that will bear your chimney’s weight over the long haul.