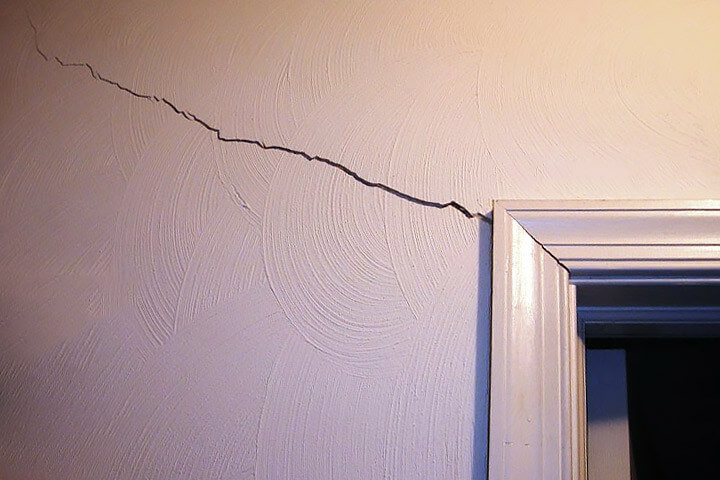 Sheetrock cracking can sometimes be associated with foundation settlement; however, foundation settlement is by no means the only cause. Other causes include dimension changes associated with moisture content changes and/or warping, shrinking, or dimension changes in the wood frame building structure. Moisture changes will occur frequently if the interior of a home is exposed to the atmosphere, which has varying degrees of humidity throughout the year. One very common cause of cracking is associated with moisture changes that occur following construction and remodeling efforts due to drying conditions that develop naturally inside a home especially once the central heating and air conditioning systems are utilized. These systems lower the humidity and moisture conditions inside a home. Most construction materials, including wood and gypsum sheetrock, experience post-installation drying.

The jagged, irregular cracks which sometimes form in gypsum sheetrock walls, and propagate outward from the tops, corners and sides of window and door openings, are usually caused by differential foundation settlement and/or floor sag. Cracks form in response to the racking effect induced in the wall when one side of the door or window opening drops. They tend to form at these specific locations because window or door openings create weakened sections within the walls. Cracks also tend to form in the taped joints between adjacent panels of sheetrock — another weakened wall area.

Such cracking is a common occurrence in the interior walls of older homes and is usually related to long term floor sag and/or creep. The floor structure beneath most homes consists of floor joists which span from opposite-facing foundation walls to a central main beam girder. The beam-girder usually rests upon several foundation piers. A wall which separates adjacent rooms inside a home is commonly called a “partition wall.” Walls that provide structural support to a second floor or roof are called “load-bearing walls.” Load-bearing walls must be located directly above a beam-girder and/or foundation system; thus, they are usually located near the center of a home. If these walls are not located above a beam-girder, long-term floor sag will usually occur. Partition walls, on the other hand, do not support any load or weight other than their own. Their weight, however, can be enough to make the floor sag over time. As the floor sags, one side of the doorway will drop (the door will rack), causing large stress concentrations to form in the sheetrock wall above the door opening.

Once a crack forms, unless the wall is properly stabilized with additional support, it is likely to enlarge with time, or reappear, even after cosmetic repair. This type of cracking can also be aggravated if the partition wall lines up near the center of a central beam girder. In this case, the beam-girder may also be sagging, increasing the degree of racking. Also, if differential settlements develop between the interior foundation piers and the exterior foundation walls, the cracks can worsen. Finally, one other cause of wall cracking above the interior doorways has to do with the long-term shrinkage and expansion of a center, main beam girder. This is especially true if the girder is positioned beneath the floor joists.

Differential foundation settlement problems can often be stabilized and releveled by foundation underpinning. This process entails excavating beneath the footing with closely spaced shafts and filling the shafts with concrete. Typically the concrete pour is stopped 12-18 inches below the existing footing so that hydraulic jacks can be inserted to lift and level the settled footing. Some firms utilize backhoe excavation, while others utilize augers to excavate cylindrical pier shafts. One proprietary method of repair uses helical screws to lift settled foundations. Another uses driven shafts of steel.