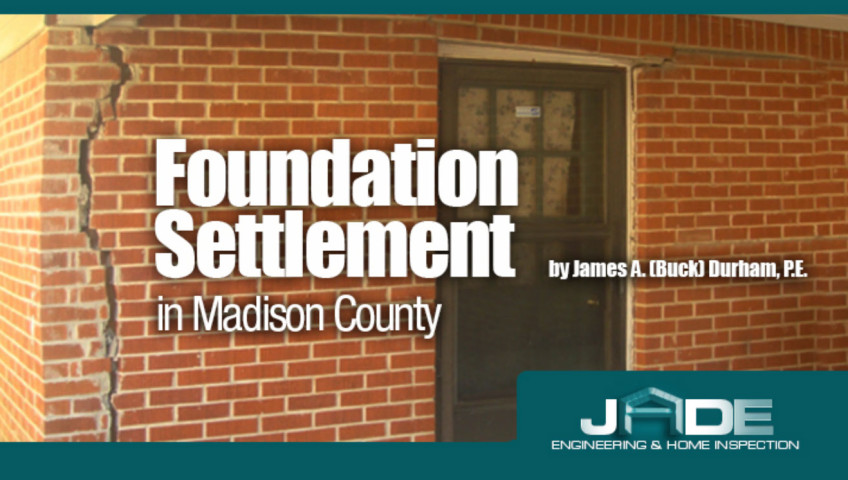 After over three decades of inspecting houses throughout Madison County, I feel that I have a lot to offer you on this topic. It all starts with the geology of Madison County. The mountains are all capped with sandstone bedrock, whereas the valleys are underlain with limestone. The side slopes between the mountaintops and valleys contain a multitude of rock formations including limestone, chert, sandstone and shale. These rock formations were located at the bottom of the ancient seas and oceans and have been weathering away for millions of years since the seas receded to the point where there is a regolith of rock boulders, cobbles and varying depths of soil overlying them. This is what we stand and build upon. Most of the surficial soils are residual sands, silts and clays, which have evolved from the weathering of the parent bedrock. The rust-colored flat and rolling cotton/corn fields, which predominate our rural landscape are of this descent. So are the orange-tan-gray sticky clays in the hilly areas of Huntsville proper. Whenever you get near streams and rivers, you have alluvial soils (sandy, silty, clayey soils) near the surface-soils, which have been washed in over tens of thousands of years. Along the sides of mountains you have residual and colluvial soils at the base, residual and colluvial soils along the side slopes, and residual sandy-silty soils up on the mountaintops. Colluvial soils are those, which slowly erode and tumble/move down the mountain slopes under the pull of gravity. They are unconsolidated and subject to saturation during heavy rains during which time they may shear and slide down the hill (landslide). This was the reason why the City of Huntsville initiated the Mountainside Ordinance in 1989 to ensure the proper engineering evaluation of the stability of hillside slopes before home construction begins. 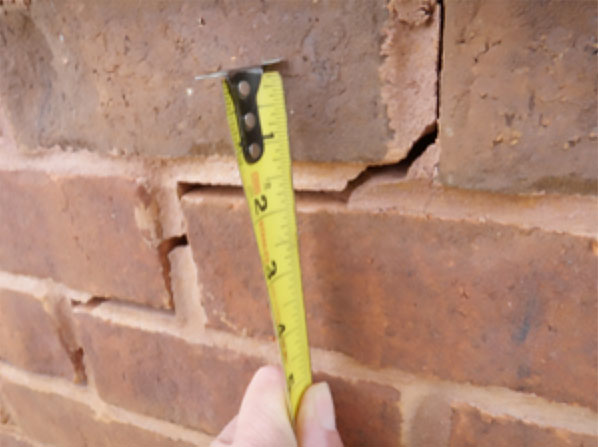 Because of the geology, the topography of some of our area consists of moderate to steeply sloping, wooded hillsides, which generally have a shallow bedrock depth- this is especially true in areas where numerous boulders or bedrock pinnacles outcrop the ground surface. House construction in this type of terrain usually requires extensive land clearing and the addition of fill soil to provide a level pad or acceptable base on which to construct footings and foundation walls. Moreover, because of the ground slope, houses are often constructed on crawl space foundations, which bear on footings that stair-step "up and down" the natural and/or "artificially created" grade. Many times the footings are founded partly on rock and partly on soil. If the soil-supported footings settle and the rock-supported footings do not, a differential settlement can occur. Differential settlements are frequently the cause of foundation wall and brick veneer cracking; they are exemplified by stair-step crack patterns and/or crack patterns which indicate rotation or pivoting of the footings about a central point.

Foundation settlements can also occur whenever the bearing pressure of the foundation footing exceeds the strength of the supporting soil; whenever the supporting soils are fill soils that have not been properly compacted; or whenever the underlying soils include mixed organics (vegetation) that decays over time (it is not unusual for foundations to rest on large tree stumps or root systems that were cut to the ground level). These are the types of settlements that occur on mountaintops and in the valleys. 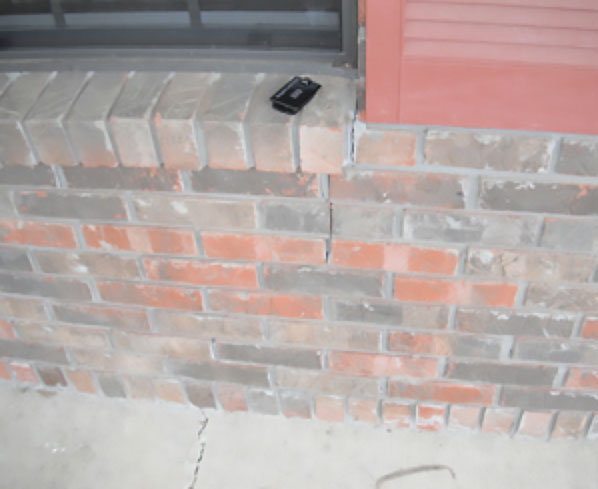 Another common cause of foundation settlement or what should be called "foundation movement" in our area is associated with the physical nature of the underlying subgrade soils. These soils are usually residual clays that have evolved from weathered limestone bedrock. They are the tan-orange-gray, sticky soils. Geo-technical engineers classify these soils as "highly plastic" since they remain plastic (or moldable) over a wide range of moisture contents. Highly plastic soils physically shrink in volume whenever they dry or desiccate, and swell in volume when they become wet. Much like a household sponge. Inevitably, during the dry summer months shallow-bearing foundations tend to settle, causing cracks in foundations and brick veneer; during the wet winter months the cracks often close and disappear as the soils swell. This movement can cause doors and windows to stick and cracks to form in brick veneer, concrete block and drywall that open/close throughout the year. Proper site drainage is imperative in this geologic/topographic setting because the soils should maintain as close as a uniform moisture content as possible throughout the year. If water stands or collects in low lying areas near foundation walls, the subgrade soils can become and/or remain saturated even as adjacent soils dry-creating a differential soil moisture and subsequent differential foundation movement.

Regardless of the cause, the potential for long-term differential foundation settlement is very good in our area. Thus, in new house construction, it is imperative that footings be located on stiff underlying subgrade soils- preferably deep in the ground and/or on bedrock, or below seasonal drying penetration-and that proper drainage be provided to prevent water from standing and soaking into the ground around the home (saturating the supporting subgrade soils). Of equal concern is water that flows harmfully alongside the foundation walls; it can lead to erosion undermining.

So what is the solution to foundation problems?

It all depends on the amount of distortion. If the corner of a home settles as little as1/4 - 1/2 inch, it can create cracks in concrete block and brick veneer. However, the wood frame superstructure, sitting on the foundation, can care less about this little bitty movement. In this case, nothing needs to be done structurally. The cracks in the brick and block can be pointed with new mortar to make a cosmetic repair. Or the cracks can be left alone as they typically cause no problem if left open. Also, making a cosmetic repair with a contrasting mortar color can stand out like a sore thumb. Hence, leaving the cracks alone 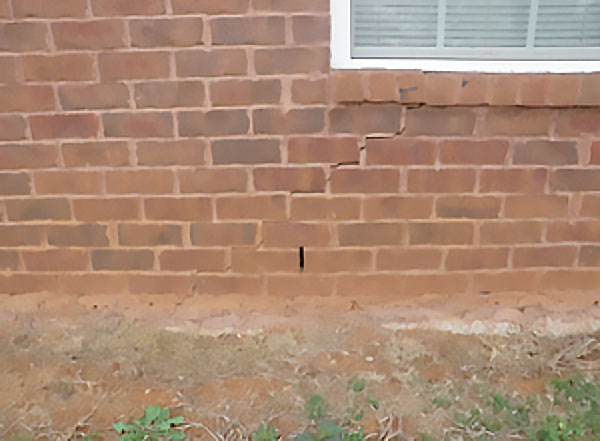 is often the best bet. If, on the other hand, the foundation settles three inches, and the windows and doors become bound shut, then there will surely be interior drywall cracks and safety concerns about adequate egress during a fire or some monstrous Act of God. In this case, it may be prudent to underpin the foundation with deep-drilled concrete piers or steel-pipe, helical piers. There are a host of foundation repair companies that perform this type of repair. The best way to determine when a foundation repair is needed, is to perform a floor level survey inside the home. This entails mapping out the interior floor plan and then measuring the floor elevations with a manometer (water level). If this is not done, then no one can state how much distortion has taken place. Is it ¼-inch or is it 3-inches? This must be determined before a foundation repair is considered. This is especially true because foundation repairs are very expensive-usually costing $ 5,000.00 or more. A floor plan and level survey by an engineer may cost $ 800.00 or more, but the information garnered from this study is worth its weight in gold. It has been our experience that 90% of the homes having cracks in their brick veneer do not need expensive foundation repairs. This is because brick veneer is very brittle and cannot withstand the slightest amount of stress/strain without cracking to relive the stress/strain. And most of the home's we've inspected had differential settlements of less than one inch. A good rule of thumb when considering foundation repair, is that if there are no drywall cracks opposite the brick veneer cracks, there is a high probability that no foundation repair is needed. Drywall is more resilient than brick veneer and when it develops cracks, it is usually a sign of significant building distortion.