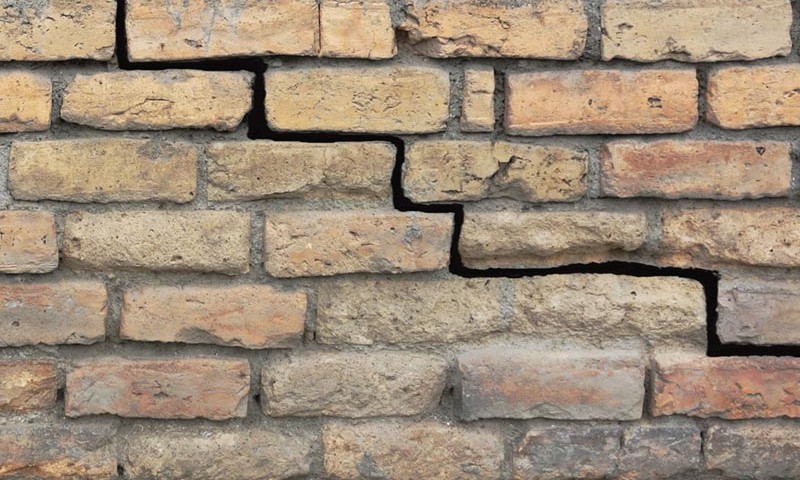 There’s a growing dilemma in residential homes the United States regarding brick veneer cracks. Home inspectors and home buyers discover these cracks in brick veneer during the sale of homes. Everyone gets a home inspection these days and all home inspectors are afraid of the brick veneer cracks because they fear for their professional liability when asked for an explanation as to their cause and significance. So, they usually recommend that a professional foundation contractor or engineer be brought in to specifically evaluate the cracking problem(s) after the home inspection.   Engineers, who often charge in excess of $ 150.00/hr with minimum fees of $ 300.00 or more, are often considered to be too expensive by the buyers or sellers, so nine-point-nine (9.9) times out of ten, the realtors will bring in a foundation contractor for a free evaluation. When you think about it, this might be akin to asking the fox to guard the hen house, because the majority of the time, the contractors recommend foundation underpinning to either stabilize or re-level a settled footing. That’s what they’re in the business to do. That’s how they put food on the table. They call brick veneer cracking “foundation failure” and they guarantee they can stabilize the foundation in the area of brick veneer cracking for the life of the home. This is pretty impressive.

Most people don’t realize that it takes very little differential foundation settlement to crack brick veneer, because the veneer is a rigid, brittle material. It simply cannot stretch to any appreciable degree without cracking to relieve stress and strain. Home-buyers are horrified of brick veneer cracks because they see the brick veneer as the primary structural element of the home. You know, “Brick veneer provides a bold, castle-like, powerful look.” Buyers are not told by the foundation repair contractors that it is simply a veneer, or weather barrier, and no different from vinyl, wood or stucco siding.

The most remarkable and alarming thing is that most of the time whenever foundation repairs are implemented, there are no cracks in the interior–predominantly-painted-drywall finish–directly opposite the brick veneer cracks. Thus indicating that if in fact the brick veneer cracks were related to differential settlement, the amount of differential settlement was so slight that it did not crack the interior drywall finish. And this brings up a very important point: if the home had vinyl siding or wood siding or EIFS, then there would be no cracks needing a free structural evaluation whenever there are no interior drywall cracks opposite the brick veneer cracks. Seriously, most of the time there are no interior drywall cracks, so the home inspectors never question any unusual foundation movement. It only happens with brick veneer homes.

Trust Me, I’ve Been Doing This A Long Time — It’s Probably Not What You Think

I have been inspecting residential buildings for over three decades and half this time, I have been performing floor level surveys using a manometer. Never have I inspected a home, which had less than one inch of floor level variation across its entire footprint. And these lowest floor elevation-variation-homes are usually (drywall) crack free homes. I typically do not look at new homes, but I suspect they can be constructed to much tighter tolerances than one inch over the footprint. Hence, the post construction differential settlements that seem to occur with many houses (and we have seen many), over their lifetime, may be great enough to adversely affect (crack) the brick veneer, but not the somewhat also brittle interior drywall finish. These slight settlements definitely do not adversely affect the wood frame superstructure (a flexible combination of studs, joists, rafters, sheathing and nails/screws), and they often do not affect the foundation structure. This leads to a possible theory that it may be torsional footing rotation or settlement only below the outer edge of the continuous exterior wall footings, as causing the brick cracks, since the brick sits outside the foundation walls—usually within a few inches of the footing’s outer edge. As stated, brick veneer is very brittle. So a slight settlement beneath the outer edge of the footing, which doesn’t affect the foundation wall or wood frame superstructure at all, may cause brick veneer cracks but not interior drywall cracks. The lack of drywall cracks is more important than the evaluation of brick veneer cracks.

I wish that the engineering community would help put an end to this brutal punishment of the home seller — someone who typically has lived in the home with the brick veneer cracks for ten or more years. It is truly a travesty that the realtors pressure the sellers into paying the foundation contractors for what amounts to absolutely nothing significant most of the time. Especially when the brick veneer cracks were caused by some other cause than differential foundation settlement. And believe it or not, this is quite often the case.

Early in our careers, we were scared to death by brick veneer cracks. Just like the home inspectors of today. We now see that they are a common development in nearly every brick home. This is primarily attributable to the lack of use of expansion joints in residential brick veneer construction, and what has proven to us to be very minor differential foundation settlements that occur in nearly all houses over their lifetime. When you add in the other common causes of brick veneer cracking, you can see why there is so much foundation repair being done in the Real Estate industry to address brick veneer cracking. It’s normally ridiculous.