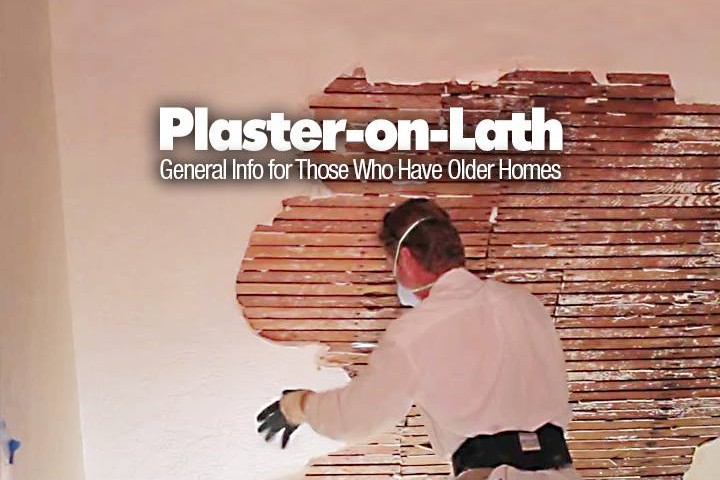 Prior to the mid-1950s, interior finish in most houses consisted of plaster on lath. In this type of system, a series of narrow strips of wood, or split boards, are nailed horizontally across the wall studs or ceiling joists. Each wall frame is literally covered in lath, tacked at the studs. The lath is typically about one inch wide by four feet long by 1⁄4 inch thick. Each horizontal course of lath is spaced about 3⁄8 inch away from its neighboring courses. These spaces are critical.

Temporary lath guides are then placed vertically to the wall, usually at the studs. Plaster is then applied, typically using a wooden board as the application tool. The applier drags the board upward over the wall, forcing the plaster into the gaps between the lath and leaving a layer on the front the depth of the temporary guides, typically about 1⁄4 inch. A helper feeds new plaster onto the board, as the plaster is applied in quantity. When the wall is fully covered, the vertical lath "guides" are removed, and their "slots" are filled in, leaving a fairly uniform undercoat. The plaster, which oozes through the lath gaps tends to bulge out and solidify, thus forming a key or lock to the wall. This is what holds the plaster in place.

In three coat plastering it is standard to apply a second layer in the same fashion, leaving about a half inch of rough, sandy plaster (called a brown coat). A smooth, white finish coat goes on last. After the plaster is completely dry, the walls are ready to be painted.

On many older homes (1850s to 1950s) the plaster on the walls and ceilings often started to separate under the pull of gravity as the wood-framing members experienced shrinkage from loss of moisture and the plaster keys between the laths broke off. Overtime, more and more keys broke away under the pull of gravity to the point where sections of plaster cracked severely, collapsed or dropped down excessively. As a repair, more lath and plaster was installed.

Eventually the wood laths became less common, and were replaced with rock lath (also known as "button board"), which is a type of gypsum wall board with holes spaced regularly across it, usually in sheets sized 2 feet (24 in) by 4 feet (48 in). The purpose of the four-foot length is so that the sheet of lath reaches exactly across four wall studs, which are spaced 16 inches (410 mm) apart on center - a long time building standard. The holes serve the same purpose as the spaces between the wood lath strips, allowing plaster to ooze through the board when the plaster is applied, making the keys to hold the plaster to the wall board.
Lath and plaster has been mostly replaced with solid drywall or plasterboard (also a type of gypsum wall board, although a bit thicker), since it is faster and less expensive to install.

In plaster-on-lath construction, there is no joint reinforcement tape utilized. The plaster meets at all corners and bonds or seals to itself. In drywall, the butt and corner joints are all taped and spackled to create a reinforced joint with smooth finish for painting.

For those older homes, which still have a lath and plaster finish, whether it be plaster on wood lath or plaster on rock lath, it is not unusual for cracks and corner separations to develop naturally throughout the year, simply due to seasonal changes in humidity and temperature. These environmental changes cause movements in both the wood framing and plaster. They are not signs of a structural problem. Modern drywall is much less prone to developing these cracks and separations because of the tape-reinforced joints.